Pop it, a hit: how a rainbow, reusable bubblewrap fidget toy became a playground must-have

You are here:
Industry news 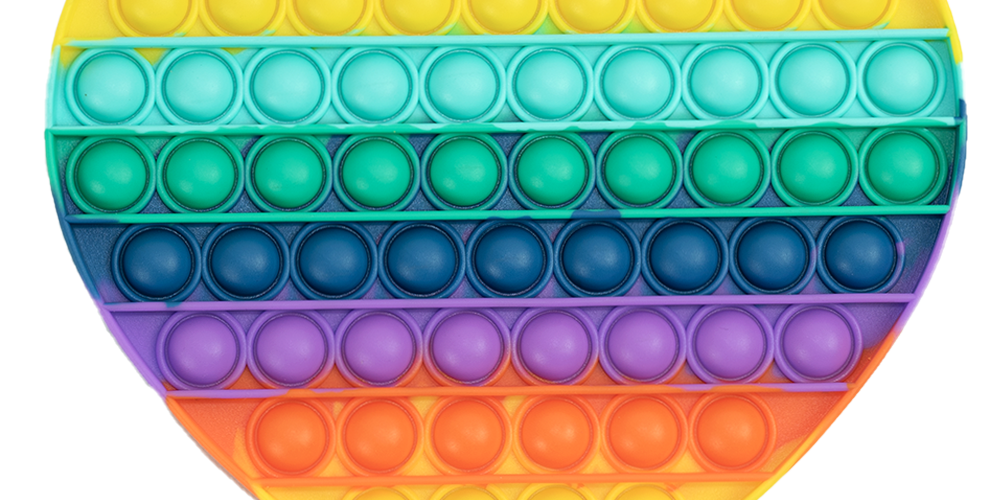 Pop its and other sensory silicone fidget toys have taken over TikTok and primary school playgrounds. Are they a passing fad, a concentration aid, or both?

When I had my first child, the thing that filled me most with dread was television. You read that right: it wasn’t the loss of my independence; the prospect of sleepless nights; or the fear of what might happen to them in the big bad world.

Rather, I was preoccupied with all that tailored to children marketing I knew would make my kids want brightly coloured crap that would capture their attention for about three days, sit in a messy toy box for three years, then lie in landfill for eternity.

Thankfully, the slew of streaming services has saved me from all that advertising I once feared, but once every while a toy trend will come at you so forcefully even hiding out in a nuclear bunker won’t save you.

And right now, that trend is the fidget pop it. I guess it was only a matter of time before someone figured out they could make a less disposable version of bubble wrap, sell it to kids and make their parents pay for it. But I doubt even that savvy business person could predict how popular fidget pop its would be.

For those lucky enough to be unfamiliar, the fidget pop it is essentially a silicone-based tray of half-sphere “bubbles” that can be pushed in, thrilling kids with the resulting popping sound.

They’re sold mainly online – Facebook Marketplace, Amazon, eBay, AliExpress and the like – available in a variety of colours, sizes and shapes (including the unicorn; insert eyeroll emoji here), and once a kid’s done popping one side, all they have to do is turn it over to have another go.

The Therapy Store owner Nick Taylor says he’s had so much interest from schools, businesses and members of the public alike he can hardly meet demand for the toys.

“We have boxes of them disappearing every day and are having to use multiple suppliers to keep them in stock,” he says. “In some hands they are just a popular toy, but there are some children who may actually really benefit from them.”

That “sensory” benefit is what makes this toy different from say, a L.O.L. Surprise! doll, but similar to 2017’s toy craze, the fidget spinner.

According to Dr Katherine Isbister, professor of computational media at the University of California, fidgeting behaviour is quite widespread, and the fact that this is becoming more recognised has led to an increase in innovation around products like the pop it, that are intentionally designed and marketed to support fidgeting.

“Often people just use what’s ready to hand – a paper clip, a USB stick, the sleeve from a takeout coffee,” she explains. “People say that fidgets help them to pay attention and focus, and they also say fidgets can help them calm down or work with feelings like anger.”

Children are no exception. Isbister states that there hasn’t been enough “scientifically rigorous research” into fidget toys yet, but she does say that her studies with kids and their caregivers around fidgeting imply that “the right kinds of fidgets seem to help kids to focus and manage emotions”.

Indeed, fidget toys have been available for kids to use for therapeutic purposes for a while now, with local and international therapy stores like Taylor’s offering pop its, and other similar toys like Pop Toobs and Simpl Dimpls.

Isbister is currently working with specialists in children’s social-emotional learning, including Dr Julie Schweitzer of University of California Davis, to do research on the impact of fidget objects on attention for people with ADHD.

She says that some therapists recommend fidget items for people managing ADHD, with the caveat that these devices don’t attract other people’s attention with motion or noise. This could explain the rapid rise and demise of the fidget spinner.

Whether the pop it will suffer the same fate as that loud, whirring toy remains to be seen – they’re certainly quieter.

This time around, I am holding my breath for my own personal reasons. Though I managed to avoid even the Wonder Woman-themed fidget spinners four years ago, my kid is in year two now, and more aware of what’s cool (read: not me). So I’ve caved for the sake of five minutes’ peace.

And in case you’re wondering, it is in the shape of a unicorn. Didn’t I say that some toy trends are just unavoidable?

This year’s fidget spinner? How pop its have become the latest toy trend
March 5, 2021

The EVA foam material price is climbing in China
July 12, 2020

Danny R.regular customer
Some fact about us
Go to Top