This year’s fidget spinner? How pop its have become the latest toy trend

You are here:
Industry news 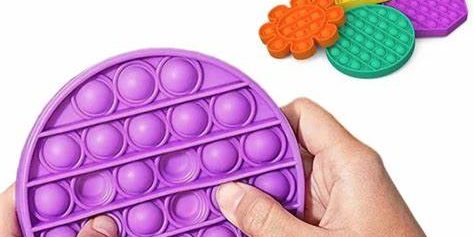 Tiktok’s newest craze is here and Irish stores have been ramping up to meet the demand for 2021’s version of the fidget spinner.

Pop its, or push poppers as they are sometimes known, are simple devices. Made of plastic and silicone, the colourful toys usually come in disc or square shapes and work similarly to bubble wrap – except there is no end with these reusable items. You push the bubbles down, flip over, and push again.

“It’s like bubble wrap, you just can’t resist it. I was playing with one myself the other day. It’s kind of addictive. There’s something about it that’s just so soothing,” says Sheila of Sensational Kids, a national network that provides supports for children with additional needs.

Sensational Kids specialise in sensory toys, which are available from their online shop. Over the past few weeks, pop its have become one of the most popular items.

Smyths Toys has also been selling out of pop its, which they brought into shops as part of their new sensory range. As they describe: “Sensory toys encourage play that engages one, two or all of our senses: sight, touch, smell, taste, hearing, movement and balance.”

“A lot of sensory toys would usually be recommended by therapists for children who might have extra needs. They’re specifically geared towards honing a certain skill or they can be for a child who has a sensory processing disorder,” Sheila says.

“The push poppers are really therapeutic. It’s the big thing with every child at the moment but specifically, the reason we’re doing them is that they are great for fidgeting. A lot of kids need to keep their hands busy and to release tension so the push popper is great.”

The toys are appealing to a broad range of both children and adults, who probably have Tiktok to thank for their new addiction. Videos tagged #popit have been viewed over 3.4 billion times on the platform so far and thousands of dedicated pages to the toys have popped up in recent weeks.

“It’s literally just exploded overnight. They’re a really huge thing. It’s like the fidget spinners a couple of years back. We do all sorts of fidget toys, like squeezy balls and so on, but every child, and even adults, are going for this one.” says Sheila.

Claire Buller of siopashop.ie has also noticed the trend, selling over 100 of the toys, which usually cost under €5, in the past two months. They’ve been siopshop.ie’s most popular fidget product in the past two years.

“They have been very popular. I bought 100 just to have some in as I saw that they were going to become the newest craze and I just had to buy some more,” she says.

Claire’s nine-year-old son, who has ADHD and OCD, is an especially big fan of pop its. Her only fear is that, like fidget spinners, the devices might end up being prohibited from schools.

“They are brilliant sensory toys. I have a son with ADHD and OCD so I know how important these things can be for kids that need them. But because they then became a fad toy, they ended up getting banned in schools,” she says. “He really needed a fidget spinner at school when they came out but then couldn’t use it and we had to find him another way to fidget without being disruptive.”

A Cork-based primary school teacher who spoke to the Irish Examiner on the topic says that she has been allowing the devices in her junior infants classroom so far, where she has four students who play with the toys. The ones that they have brought in have been noiseless and she thinks the devices help to relax them while working on fine motor skills.

Sheila also doesn’t think that pop its will be a problem in schools, especially for children who need them. “If a child is diagnosed with a condition a school would be very unlikely to ban that child from having a sensory item,” she says.

Pop it, a hit: how a rainbow, reusable bubblewrap fidget toy became a playground must-have
August 1, 2021

The EVA foam material price is climbing in China
July 12, 2020

Danny R.regular customer
Some fact about us
Go to Top